My one wish out of the campaign is that people will put their energies into supporting not just our sport but women in sport in general’ Helen O Rourke, CEO of Ladies Gaelic Football.

In 2015, Lidl was experiencing struggles in the battle to win hearts, minds, and purses of the Irish shopper. Purses might appear like a leading term to describe the shopper – it’s certainly not a gender-neutral term, but shopping is not a gender-neutral activity; 70% of grocery shopping is done by females; their purchasing influence is estimated at 90% (iReach 2014 quant).

In December 2015, commenced a 3-year partnership with the LGFA (Ladies Gaelic Football Association). We saw this as an opportunity to engage meaningfully with the shopper and give them a reason to select Lidl over competitors. This sponsorship was not without its challenges. The LGFA was established in 1974, it’s the female equivalent of the GAA (Gaelic Athletics Association, male led) but similarities end there. Men’s Gaelic games are long established and respected, receiving huge levels of support. A men’s Gaelic Football or Hurling Championship final sees Croke Park at capacity and typically receives 1.3 million TV viewers. It is hugely visible through multiple sponsorships and advertising. Ladies Gaelic Football enjoyed no such support. It was largely untelevised and fan turnout is significantly lower (under 30,000 at Championship Final).

Attitudes to women in sport left a lot to be desired. This led to a harsh conclusion: not enough people really cared about Ladies Gaelic Football. Tesco held the sponsorship for 4 years until 2015 but this went largely unnoticed; a fate Lidl wanted to avoid.

This case study will show how we created a gold standard for female sports sponsorship that people would notice with unparalleled benefits for the sport and sponsor alike. 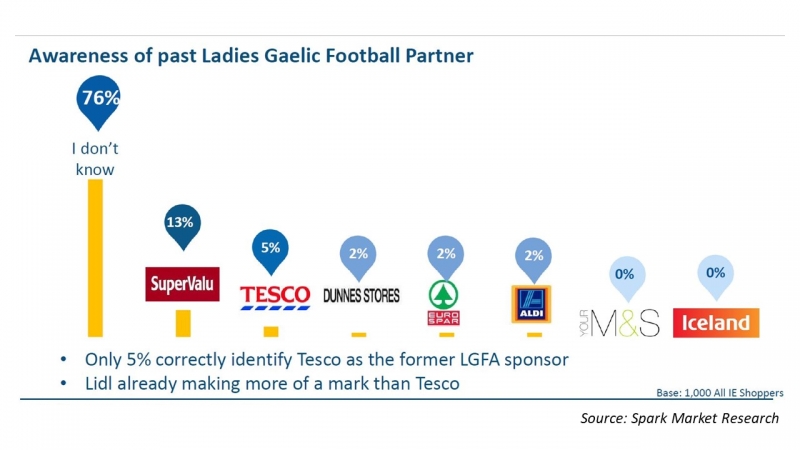