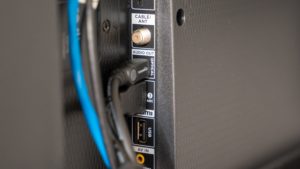 The phenomenon of cord cutting has been much talked about in recent years but to what extent is this prevalent in the Irish market? We took a look at some of the latest data to find out.

Cord cutting refers to TV viewers making a decision to move away from the traditional TV platforms and changing to viewing via online streaming services and non-TV devices.  In the US this phenomenon has been widely documented with reports suggesting that viewing via internet only sources had risen from 0.9m in 2008 to 22.2m by 2017.

There is now a large range of online AV services for the viewer to choose from in Ireland but to what extent are these driving viewers away from the traditional TV set? We have a number of sources that can help us to understand this. TAM Ireland have recently completed a Total Viewing Study of approximately 5,000 adults covering their total TV viewing habits across all devices and platforms. We also have long term trend data from the TAM Establishment Survey of 9480 households interviewed by B&A about their household, devices and access to reception types and broadband. In addition we have the data from the TV panel itself from metering of all TV set activity in the homes of a nationally representative sample of 1050 TV households.

Firstly, looking at the trends from the Establishment Survey we can see to what extent the homes have changed in their access to TV sets, platforms, and devices.

The following chart shows both TV set and internet penetration of all Irish homes. 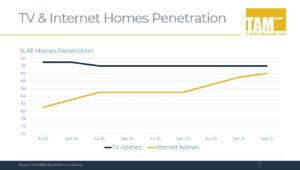 As this demonstrates the number of homes with a TV set (and without) has stayed relatively stable across the last 5 years at around 92%. This suggests that the TV set has not suffered in recent years from cord cutting and this is perhaps not surprising given the huge recent improvements in TV technology (eg flatscreens, bigger screens, HD, 4K, connected TV, TV apps etc.). Whilst there is no evidence of homes cutting the TV cord, to help give insight into the possibility of a move away from TV set viewing it is helpful to understand the profile of no TV homes. Delving more deeply into the Establishment Survey the data shows that there are two groups that are much more likely to be no TV homes. The first group are young and small households without kids. This group are much more likely to be transient and so we might expect them to acquire TV sets as they get older and settle down. The second group, which makes up approximately half of all no TV homes are non-Irish households. No TV homes are approximately 5 times more likely to be born outside Ireland. These homes may have less motivation to watch Irish TV and instead access television in their own language via the internet.

So the Establishment Survey data does not suggest that the population as a whole is moving away from the TV set with the number of TV homes static.  In the US cord cutting also refers in particular to consumers cancelling their cable or satellite subscriptions so is that happening in the Irish market? The chart below demonstrates this is not the case. 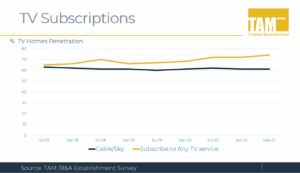 Cable and Sky penetration is relatively static across the past 5 years at just over 60%. However total subscriptions to any TV service have increased reflecting growth in other TV services, often internet delivered such as Netflix, Amaxon or NOW TV. It is interesting that these appear to be incremental to existing services rather than a replacement and again this suggests that cord cutting is not happening to a significant degree.

Whilst TV sets remain at high levels of penetration there has been significant growth in internet viewing and there are a number of other devices on which TV and AV services are being viewed. We track the growth of this on the Establishment Survey. 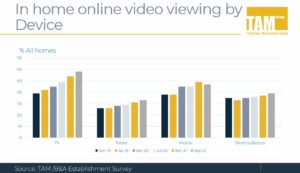 As this shows in home viewing of online video has been growing across all devices. However, interestingly the fastest growth and highest level of usage has actually been on the TV set.

So far we have shown that whilst internet viewing is growing there is no evidence of an increase in no TV homes or cord cutting driven by internet viewing and in fact the TV set is the largest and fastest growing platform for online viewing.

To understand further how people’s viewing behaviour is changing we can also look at both behaviour on the TAM panel and the recent Total Viewing Study which covered the viewing habits of 5,000 adults.

Both data sources support the case that TV set viewing remains strong despite the growth in viewing on other devices.

Firstly, from the viewing study we can see how viewing is split across devices 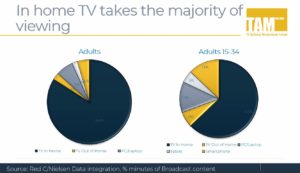 The vast majority of viewing is still on the TV set with 84% of adult minutes viewed happening in home on the TV set. Whilst young audiences are more likely to view through other devices the majority of their viewing remains on the TV set. However, this is a snapshot survey and does not tell us whether the trend in TV set usage has been impacted by growth in viewing on other devices. From TAM panel data we can see these trends and TV set usage is relatively static: 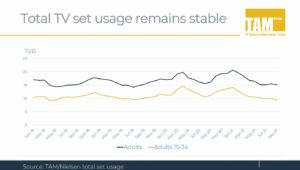 In conclusion evidence from the Establishment Survey, the Total viewing study and the TAM panel all support the fact that the TV set remains pre-eminent for viewing. There appear to be some specific reasons that some homes do not have access to TV but the number of homes without a TV set is small and stable and there is no evidence of a move away from TV set viewing. Whilst the number of services available to view is changing with growth in streaming services viewers still choose to watch on the TV. With the biggest screen and best quality viewing experience it is perhaps unsurprising that the TV set remains so popular.